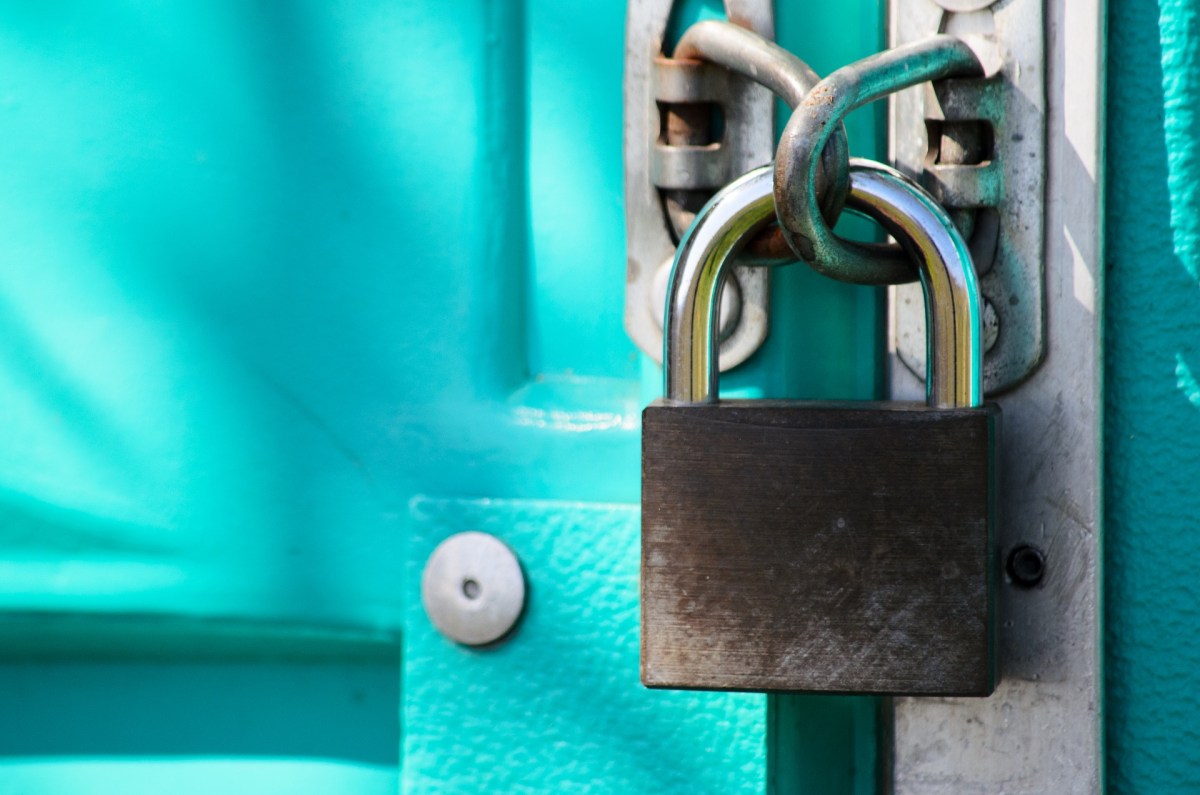 In May 2022, an automotive supplier was hit with three separate ransomware attacks. All three threat actors abused the same misconfiguration – a firewall rule exposing Remote Desktop Protocol (RDP) on a management server – but used different ransomware strains and tactics.

The second group, identified as Hive, used RDP to move laterally, before dropping their ransomware just two hours after the Lockbit threat actor.

As the victim restored data from backups, an ALPHV/BlackCat affiliate accessed the network, installed Atera Agent (a legitimate remote access tool) to establish persistence, and exfiltrated data. Two weeks after the Lockbit and Hive attacks, the threat actor distributed their ransomware, and cleared Windows Event Logs. Sophos’ Rapid Response (RR) team investigated, and found several files which had been encrypted multiple times – as many as five in some instances.

Figure 1: Files which had been encrypted five times – twice each by Lockbit and Hive, and once by ALPHV/BlackCat 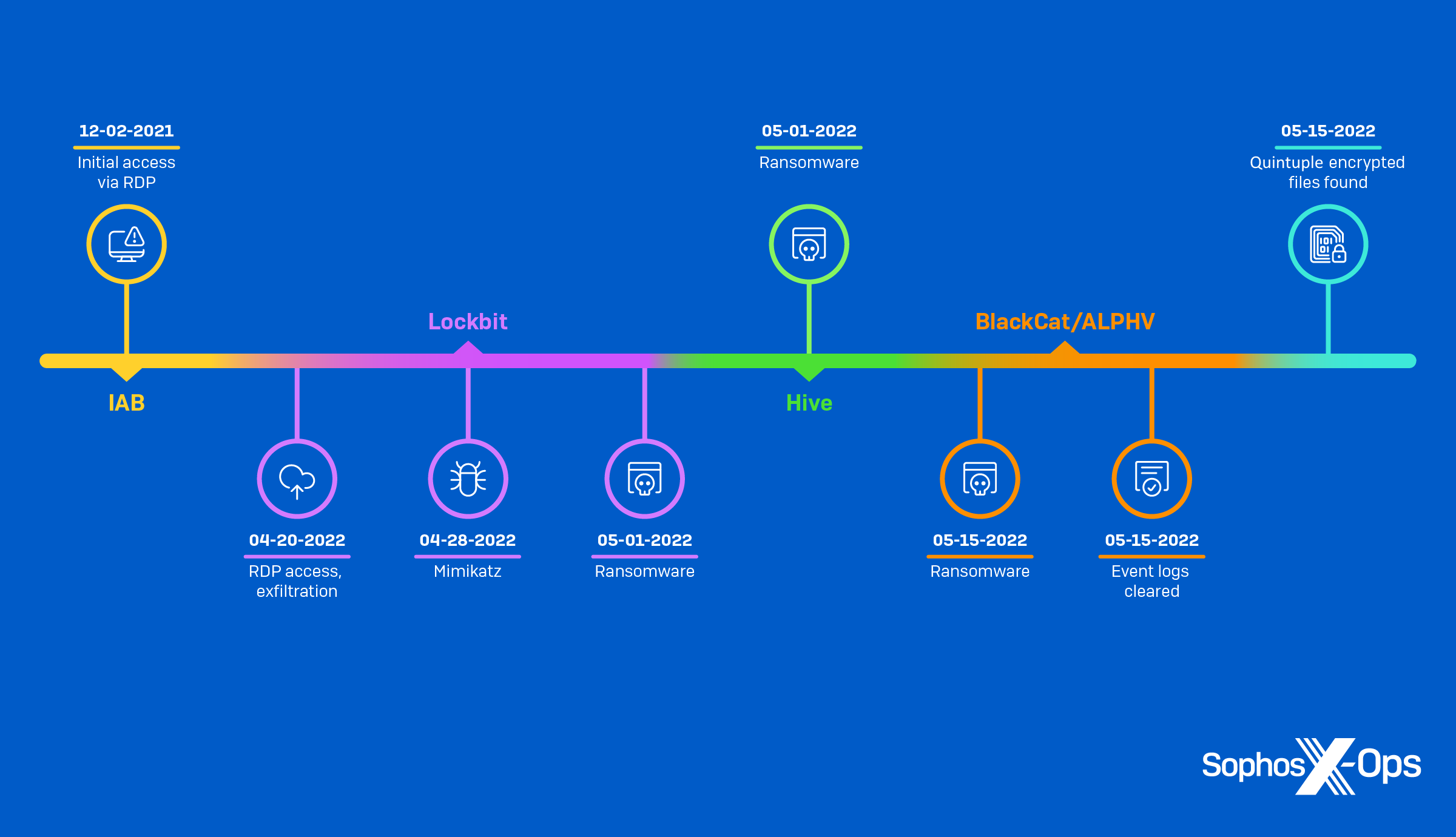 We’ve covered several dual ransomware attacks before – and recently investigated the phenomenon of multiple attacks more generally, as it’s something which appears to be increasingly common – but this is the first incident we’ve seen where three separate ransomware actors used the same point of entry to attack a single organization. 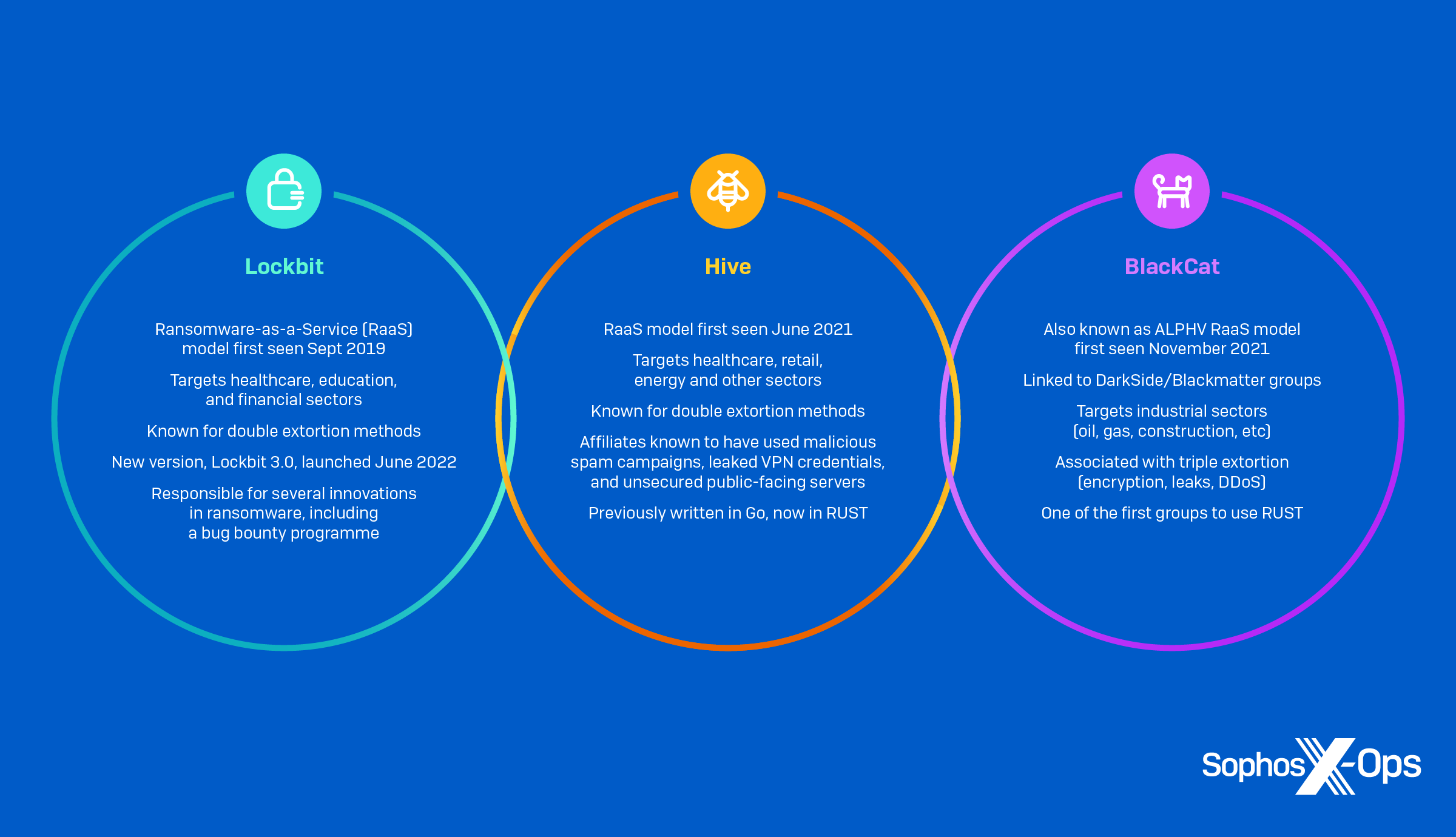 Figure 3: A brief overview of the three ransomware groups that consecutively attacked one organization

While the attacks took place in May, we discovered that a threat actor established an RDP session on the organization’s domain controller, way back in December 2021. This might have been an initial access broker (IAB) – an attacker who finds vulnerable systems and sells access to them on criminal marketplaces – or an early scouting mission by one of the three threat actors.

Either way, in mid-April 2022, a Lockbit affiliate gained RDP access to the organization’s corporate environment through an exposed management server.

Next, the threat actor moved laterally to a domain controller and other hosts, and began exfiltrating data to the Mega cloud storage service, as well as executing two PowerShell scripts: sharefinder.ps1 (to gather information about connected domain network shares) and invoke-mimikatz.ps1 (to extract passwords from LSASS, the Local Security Authority Subsystem Service).

On May 1st, the Lockbit affiliate created two batch scripts (1.bat and 2.bat) to distribute the ransomware binaries LockBit_AF51C0A7004B80EA.exe and Locker.exe across the network, via PsExec.

Two hours later, while the Lockbit threat actor was still encrypting files, a Hive ransomware affiliate gained access to the network via the same exposed RDP server and used RDP to move laterally to other hosts.

Hive used legitimate software (PDQ Deploy) already installed on the network to distribute its ransomware binary windows_x32_encrypt.exe. This tactic, known as ‘living off the land’, is popular among threat actors – particularly ransomware actors – as it has a small footprint and is less likely to be detected than downloading malicious tools. 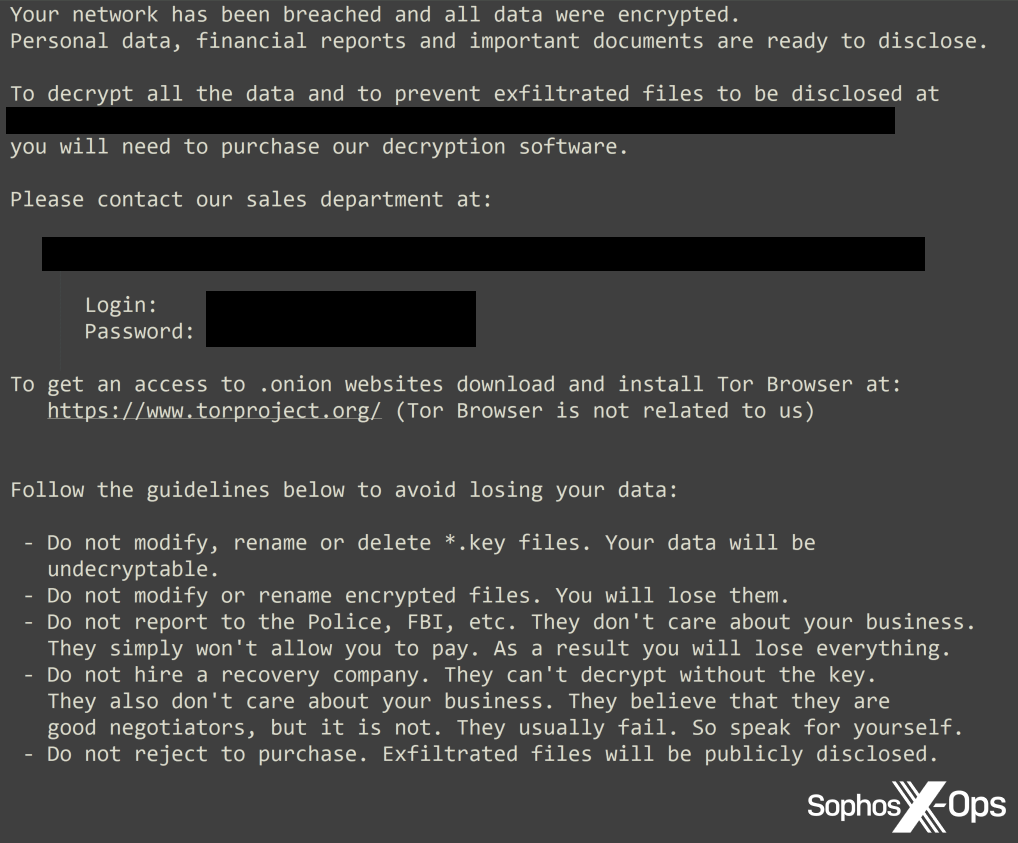 At this point, the organization’s IT team restored most of the infected systems to April 30, the day before the Lockbit threat actor began to encrypt files. From an investigative perspective, this meant some crucial evidence was lost. But the attacks were not over yet.

Only a day after that system restore, an ALPHV/BlackCat affiliate arrived, making RDP connections to domain controllers, file servers, application servers, and other hosts – all from the same management server exploited by Lockbit and Hive.

The ALPHV/BlackCat threat actor exfiltrated data to Mega over the course of a week, and established persistence by installing a backdoor: a legitimate remote access tool named Atera Agent. On May 15th – two weeks after the Lockbit and Hive attacks – the ALPHV/BlackCat affiliate used the credentials of a compromised user to drop ransomware binaries fXXX.exe and fXXXX.exe on six hosts, leaving a ransom note titled RECOVER-eprzzxl-FILES.txt in every folder. 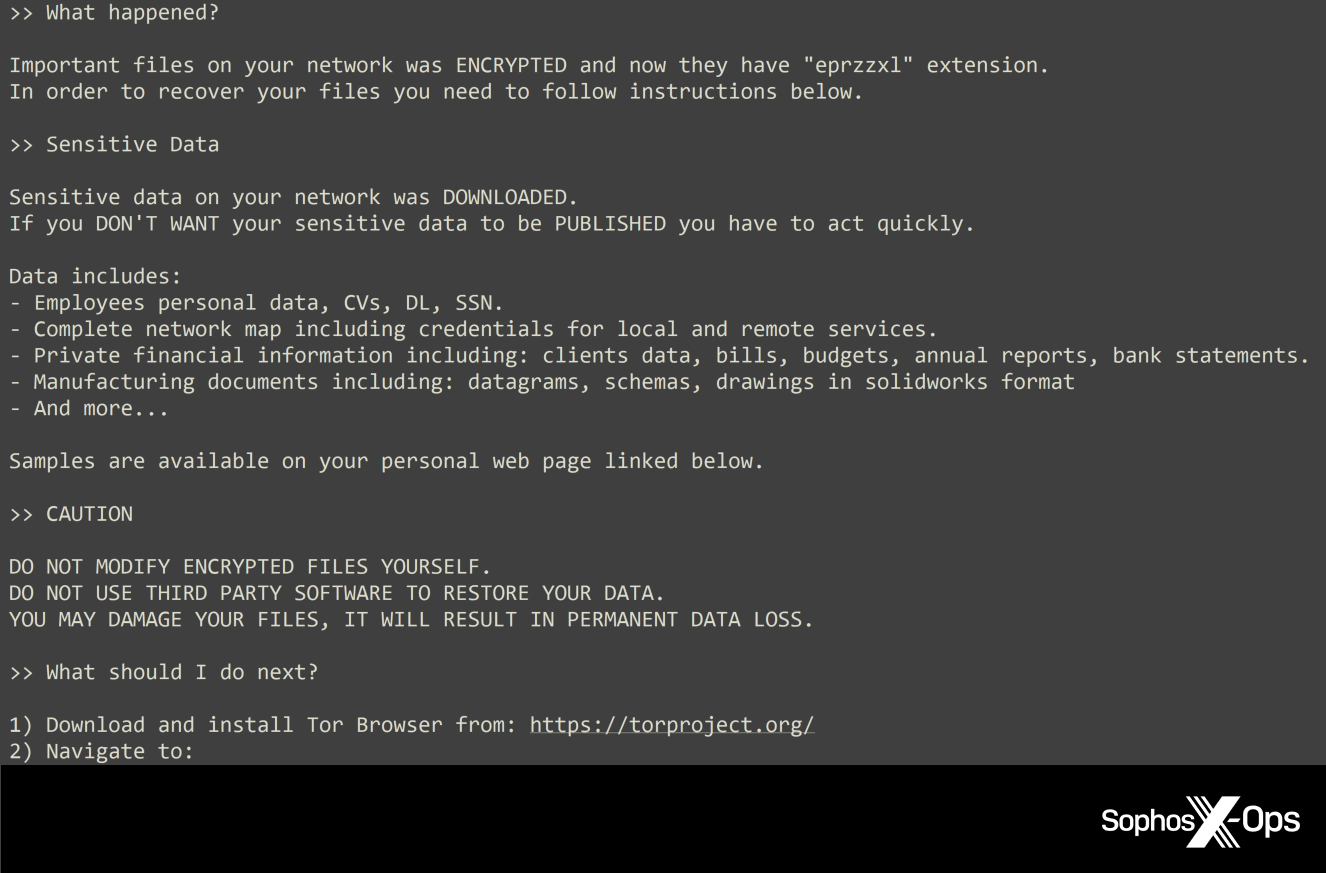 Based on analysis from SophosLabs researchers, these binaries not only encrypted files but also deleted volume shadow copies and Windows Event logs. This further complicated our subsequent investigation, as the ALPHV/BlackCat actor erased not only logs relating to their attack, but also those relating to the attacks by Lockbit and Hive.

It’s not clear why Lockbit and ALPHV/BlackCat deployed two ransomware binaries, but one possible reason is fault tolerance: If one executable is detected or blocked, or fails to encrypt, the second might act as a back-up.

The two BlackCat ransomware binaries, fXXX.exe and fXXXX.exe, have the following functionality:

After the dust had settled, Sophos’ RR team found files that had been encrypted by all three ransomware groups. In fact, as shown in the screenshot below, some files had even been encrypted five times! Because the Hive attack started 2 hours after Lockbit, the Lockbit ransomware was still running – so both groups kept finding files without the extension signifying that they were encrypted.

Figure 9: An example of quintuple-encrypted files

However, despite all three ransomware groups being known for ‘double extortion’ techniques (where, in addition to encrypting files, threat actors threaten to publish the victim’s data if the ransom is not paid), no information was published on any of the groups’ leak sites.

Several things complicated this investigation. The system restoration, BlackCat’s log-wiping, and a lack of DHCP logging all contrived to make piecing together the attacks extremely difficult. Despite these challenges, Sophos’ Rapid Response team was able to gather and analyze the evidence left behind.

When it comes to defense, there are two elements: proactive (following security best practices to minimize the risk of being attacked), and reactive (how to recover quickly and safely if an attack does happen).

On the proactive side, our white paper on multiple attackers includes several learning points and best-practice guidance, including:

But once threat actors are inside a network, there’s not much that can be done to ‘stop the bleeding’ without having comprehensive Incident Response and remediation plans, and taking immediate action. We’ve written a series of articles called ‘Hindsight security: Actions breach victims wish they had taken sooner’, which includes advice on securing RDP, enforcing MFA, setting up an incident response plan, and more. You can also request a copy of the Sophos Incident Response Guide here.

Sophos X-Ops has posted IOCs relating to the Lockbit, Hive, and BlackCat attacks covered in this report on our Github repository. 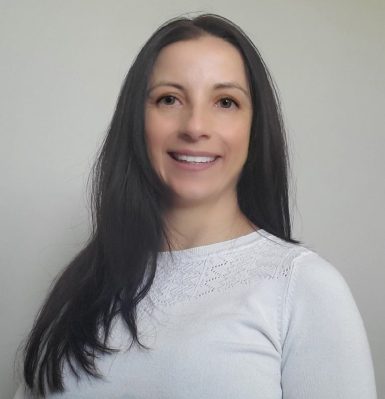 Linda is an incident lead in the Rapid Response team at Sophos, with experience working in digital forensics and incident response projects within police, industry, academia, and government. Before joining Sophos, Linda worked as a detective for a regional police service in a technological crime unit. Linda works as a part-time professor in a cybersecurity analytics college program and is the founder of Codify Zone, a tech-education company where children learn computer science and programming. Linda’s passion for education and security has led her to obtain a bachelor’s degree in computer engineering and 20+ related certifications in infosec and digital forensics. 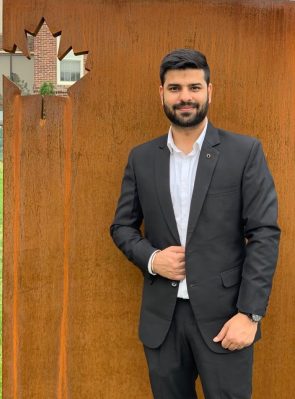 Rajat is an incident response analyst at Sophos. He specializes in providing digital forensics and incident response services for customer environments infected with ransomware, crypto miners and unauthorized access. He holds a Master of Information Systems Security and Management degree from Concordia University of Edmonton. 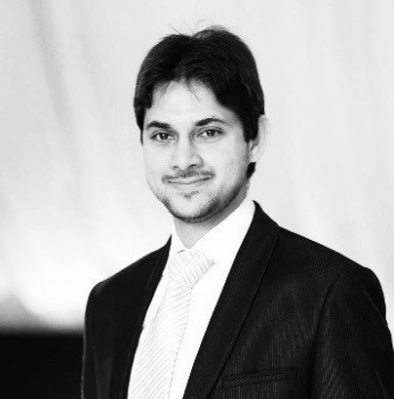 Syed blends a 15-year information technology background with deep, retrospective analysis of ransomware and cyberattacks as a Sophos Rapid Response incident responder. He specializes in providing digital forensics and incident response to customers affected by ransomware and advanced cyberattacks. Syed holds GIAC, GCIH, and GSEC Certifications, and is a member of the GIAC Advisory Board.