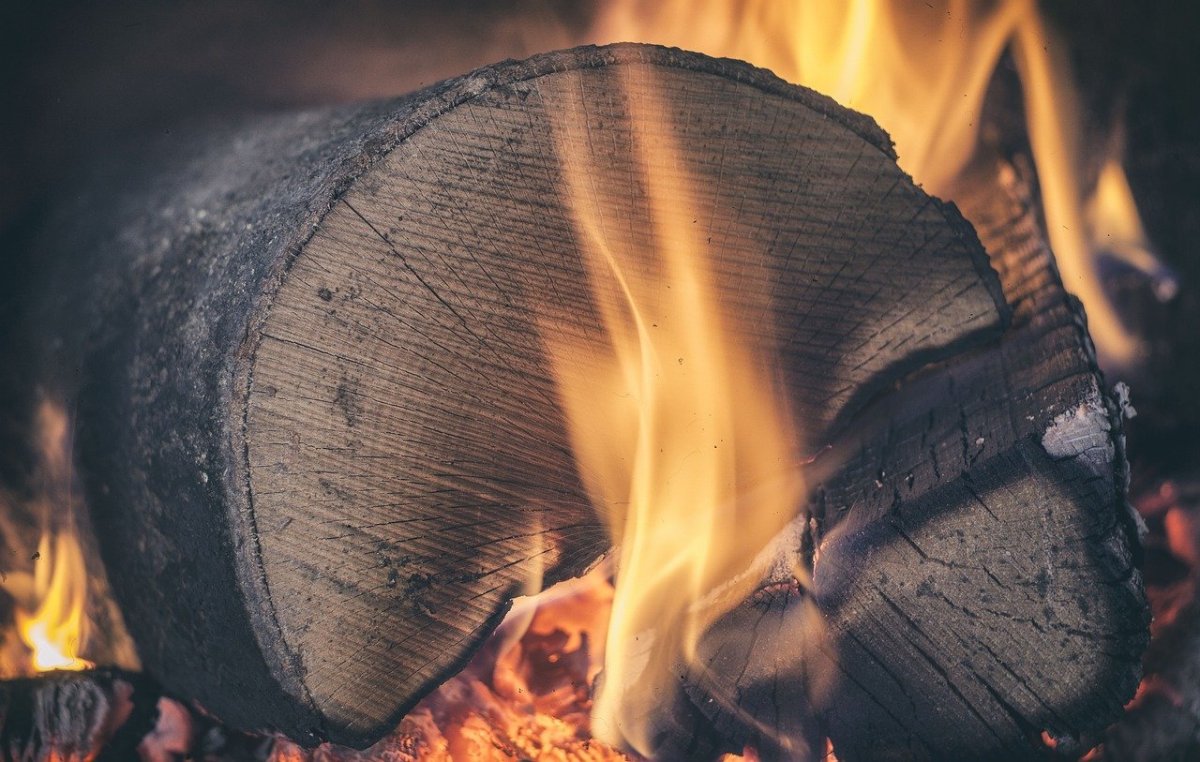 The critical vulnerability in Apache’s  Log4j Java-based logging utility (CVE-2021-44228) has been called the “most critical vulnerability of the last decade.”  Also known as Log4Shell, the flaw  has forced the developers of many software products to push out updates or mitigations to customers. And Log4j’s maintainers have published two new versions since the bug was discovered—the second completely eliminating the feature that made the exploit possible in the first place.

As we previously noted, Log4Shell is an exploit of Log4j’s “message substitution” feature—which allowed for programmatic modification of event logs by inserting strings that call for external content. The code that supported this feature allowed for “lookups” using the Java Naming and Directory Interface (JNDI) URLs.

This feature inadvertently made it possible for an attacker to insert text with embedded malicious JNDI URLs into requests to software using Log4j—URLs that resulted in remote code being loaded and executed by the logger. To understand better how dangerous exploits of this feature are,  we’ll walk through the code that makes it possible.

Here, %r outputs the time elapsed in milliseconds since the program was started; %t is the thread, %p  is priority of the event, %c is the category, %x is the nested diagnostic context associated with the thread generating the event, and %m is for application-supplied messages associated with the event. It’s this final field where our vulnerability comes into play.

The vulnerability can be exploited when the “logger.error()” function is called with a message parameter that includes a JNDI URL (“jndi:dns://”, “jndi:ldap://”, or any of the other JNDI defined interfaces discussed in our previous post). When that URL is passed, a JNDI “lookup” will be called which can lead to remote code execution.

To replicate the vulnerability, we looked at one of the many proofs of concept that have been published, which replicates how many applications interact with Log4j. In the code for logger/src/main/java/logger/App.java in this PoC, we can see that it calls logger.error() with a message parameter:

For debugging purposes,  we changed the message to a test URL that uses DNS with JNDI (built with the  Interactsh tool) to pass it as a parameter to the “logger.error()” function and stepped through the program:

We can see that after calling “logger.error()” method from “AbstractLogger” class with crafted URL, another method is called which is “logMessage”: 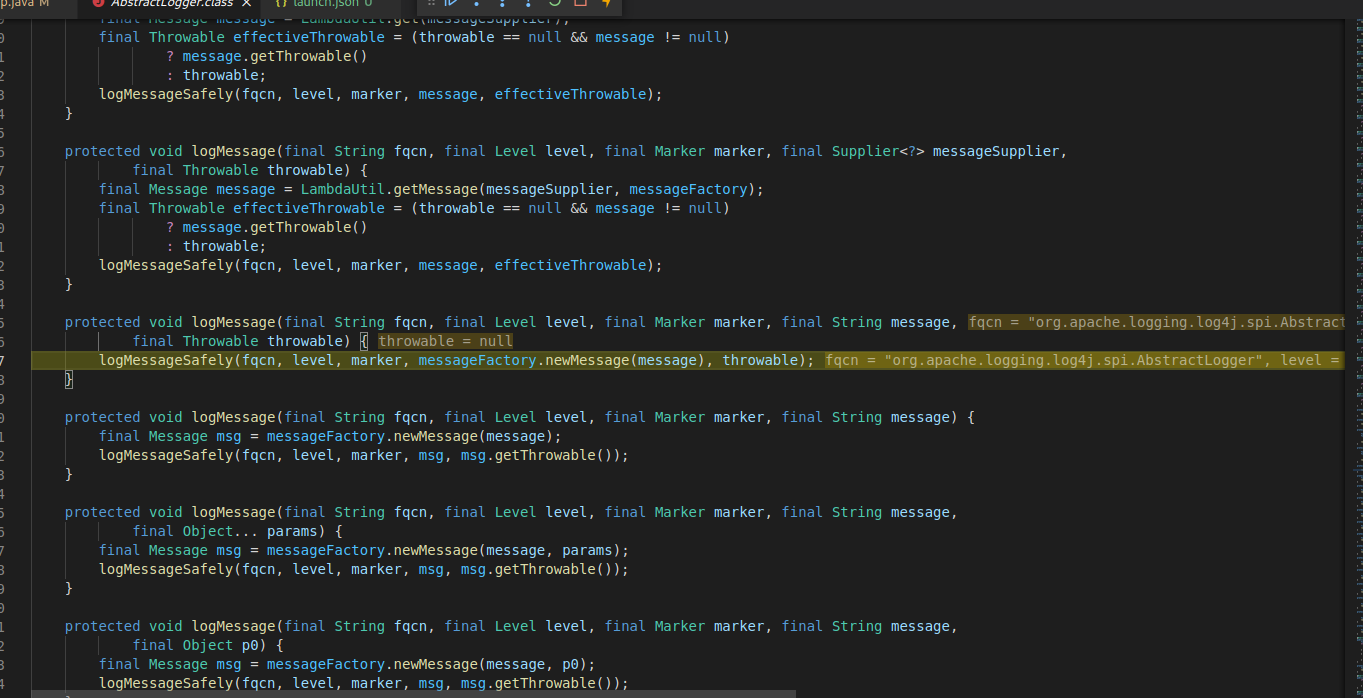 The log.message method creates a message object with the provided URL: 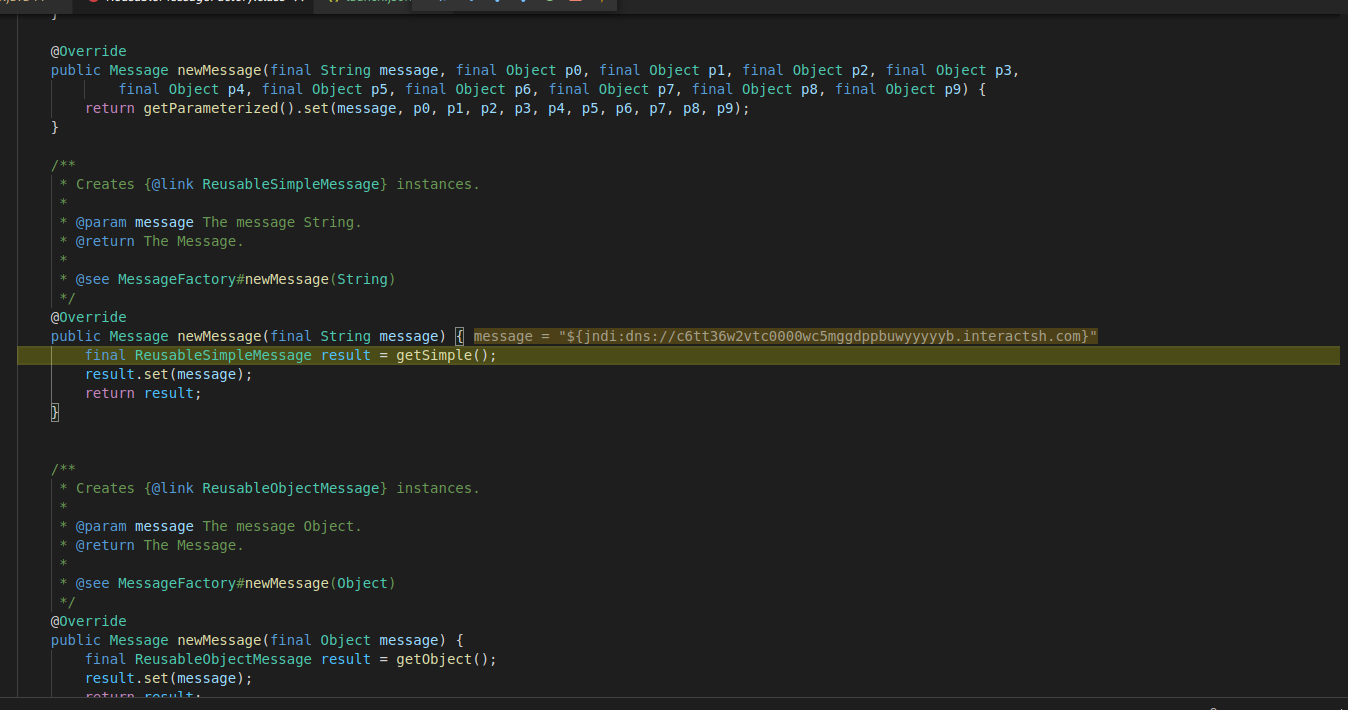 Next, it calls “processLogEvent” from “LoggerConfig” class, to log the event:

Then it calls the “append” method from “AbstractOutputStreamAppender” class, which appends the message to the log:

Where the badness happens

This in turns, calls “directEncodeEvent” method:

The directEncodeEvent method in turn calls the “getLayout().Encode” method, which formats the log message and adds the provided parameter— which is in this case the test exploit URL:

It then creates a new “StringBuilder” Object:

StringBuilder calls the “format” method from “MessagePatternConvert” class and parses the supplied URL, it looks for ‘$’ and ‘{’ to identify the URL:

After that it tries to identify various Name and values which are separated by ‘:’ or ‘-’: 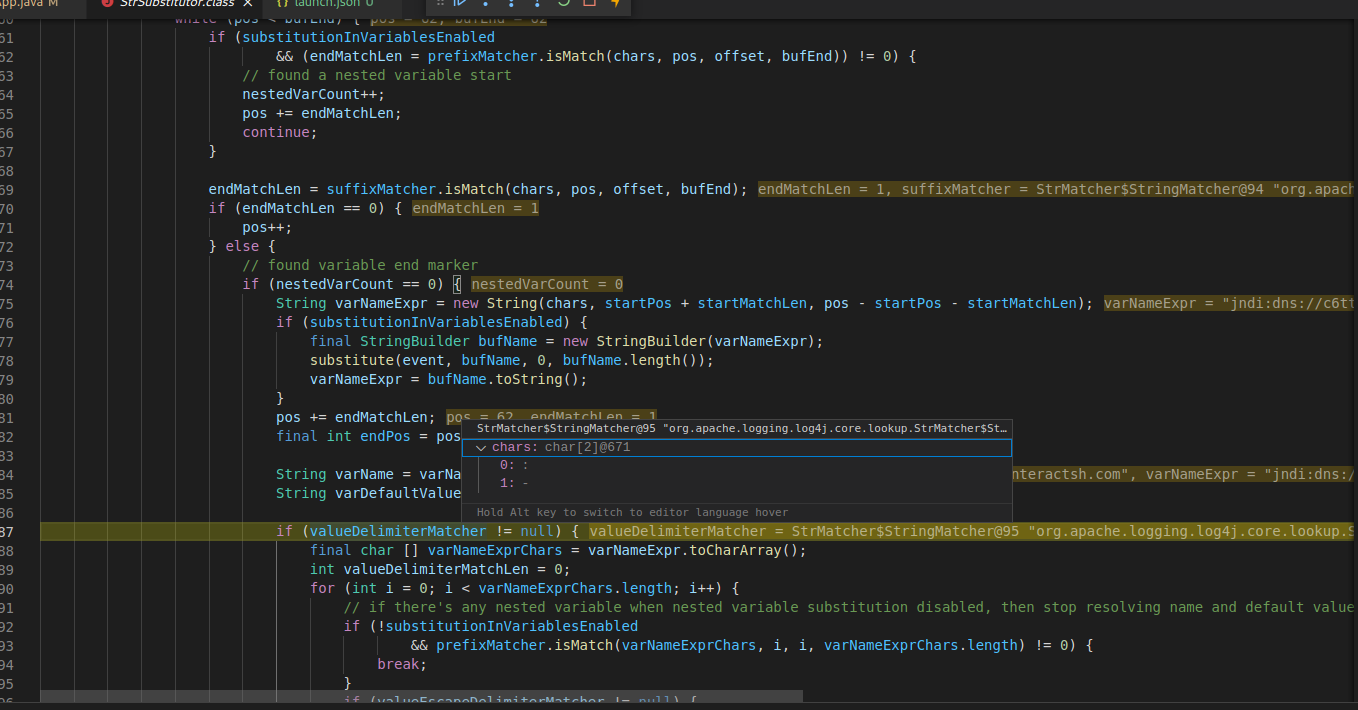 Then it calls for “resolveVariable” method from “StrSubstitutor” class which will identify the Variables, it can be any of the following:

The code then calls the “lookup” method from the “Interpolator” class which will check the service associated with the variable (in this case, “jndi”): 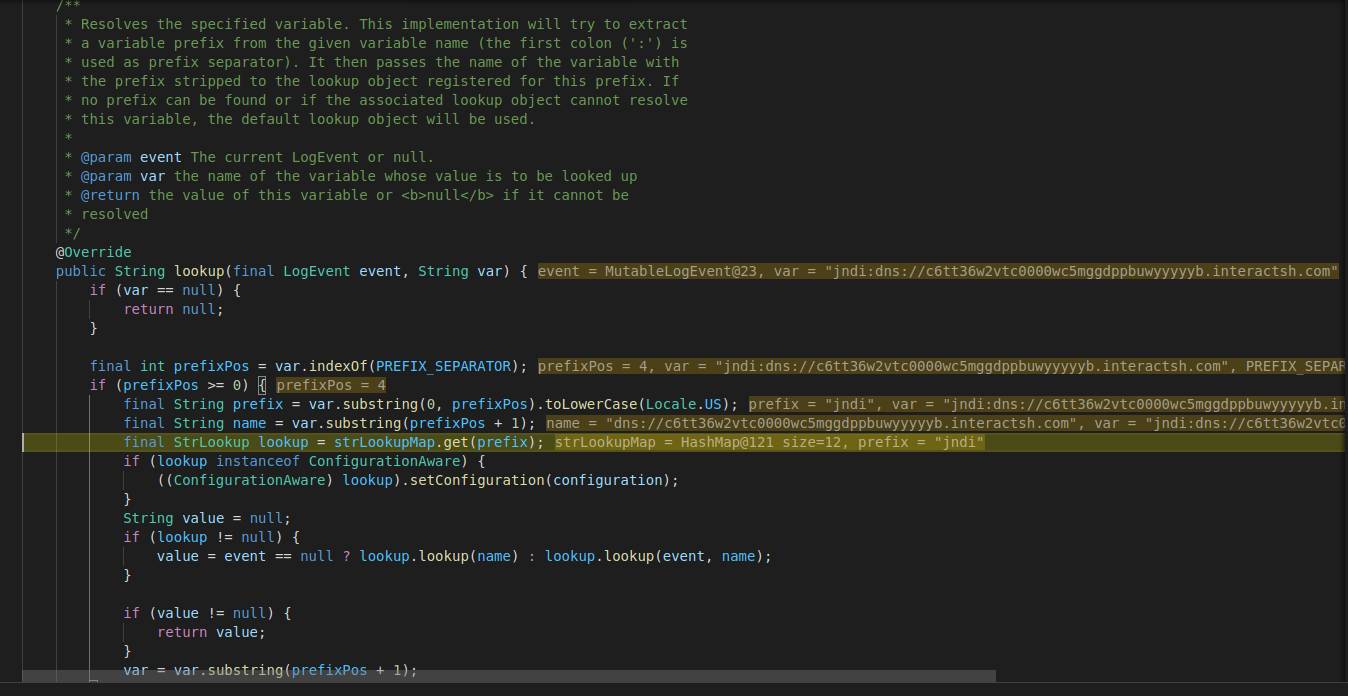 Finding “jndi”,  it calls the  “lookup” method from the “jndiManager” class, which evaluates the value of the JNDI resource: 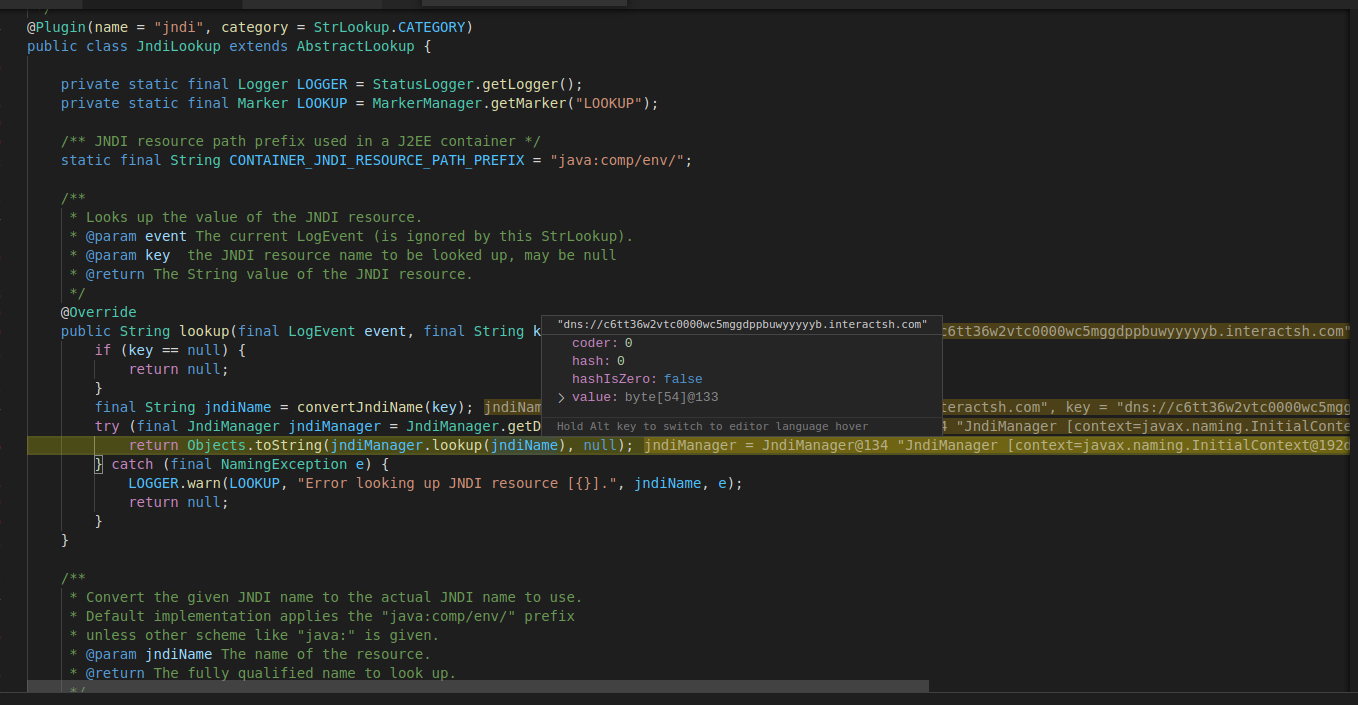 After that, it calls for “getURLOrDefaultInitCtx” from “IntialContext” class. This is where it creates the request that will be sent to the JNDI interface to retrieve context, depending on the URL provided. This is where the exploit begins to kick in.  In this case, the URL is for DNS:

In the case of a DNS URL, as this fires, we can see a DNS query to the provided URL with Wireshark:

(This is a test URL, and not actually malicious)

If URL is ‘jndi:ldap://’ it calls another method from “ldapURLConext” class to check if URL has “queryComponents”:

After that it calls “lookup” method in “ldapURLContext” class, “name” variable here contains the ldap URL:

This in turn connects with the ldap “ provided:

Then “flushBuffer” method will be called from “OutputStreamManager” class, here ‘buf’ contains the data returned from LDAP server, in this case the “mmm….” string we see below:

Looking at the packet capture in Wireshark, we see the request has the following bytes: 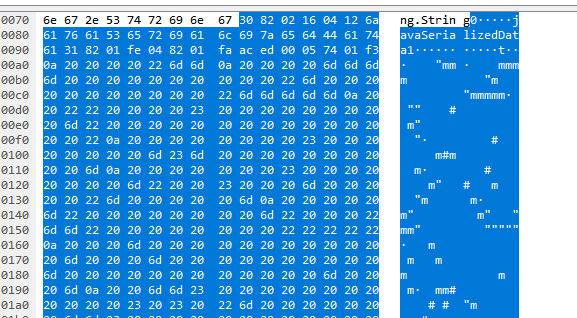 This is the serialized data and this will be displayed by the client as we can see below which shows that the vulnerability was exploited, notice the “[main] ERROR logger .App” string in the message followed by data:

The fix is in

All of this was possible because in all versions of Log4j 2 up to version 2.14 (excluding security release 2.12.2), JNDI support was not restricted in terms of what names could be resolved. Some protocols were unsafe or can allow remote code execution. Log4j 2.15.0 restricted JNDI to only LDAP lookups, and those lookups are limited to connecting to Java primitive objects on the  local host by default.

But the fix in version 2.15.0 left the vulnerability partially unresolved—for implementations with “certain non-default” layout patterns for Log4j, including those with context lookups (such as “$${ctx:loginId}”)  or a Thread Context Map pattern (“%X”, “%mdc”, or “%MDC”), it was still possible to craft malicious input data using a JNDI Lookup pattern resulting in a denial of service (DOS) attack. In the latest releases, all lookups have been disabled by default. This shuts the JNDI feature down entirely, but it secures Log4j against remote exploitation.

Log4j is a very popular logging framework,  and used by a significant number of popular software products, cloud services and other applications. The vulnerabilities in versions prior to 2.15.0 make it possible for a malicious actor to retrieve data from an affected application or its underlying operating system, or to execute Java code that runs with the permissions given to the Java runtime (Java.exe on Windows systems). This code can execute commands and scripts against the local operating system, which can in turn download additional malicious code and provide a route for elevation of privilege and persistent remote access.

While version 2.15.0 of Log4j, pushed out at the time the vulnerability became public, fixes these issues, it still leaves systems vulnerable in some cases to denial of service attacks and exploits (fixed at least partially by 2.16.0).  On December 18, a third new version, 2.17.0, was released to prevent recursive attacks that could cause a denial of service). Organizations should evaluate what versions of Log4j are in their internally developed applications, and patch to the most recent versions (2.12.2 for Java 7 and  2.17.0 for Java 8), and apply software patches from vendors as they become available.

Sophos provides coverage for network behaviors and payloads associated with this vulnerability, as detailed below: 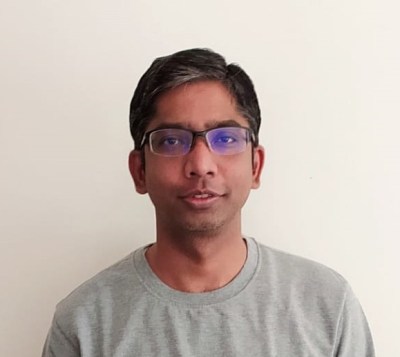 Hardik Shah is a Principal Threat Researcher at Sophos. He has extensive experience with exploits, malware analysis, and various IPS engines. Hardik enjoys figuring out ways to protect customers from the latest threats. Prior to Sophos, he worked with the IPS research team at McAfee and Symantec. You can follow him on twitter at @hardik05