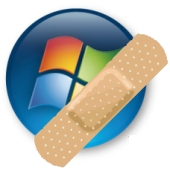 In this month’s security updates, Microsoft fixes 78 vulnerabilities: By the company’s reckoning, 17 of the fixes address critical issues, 60 important ones, and one bug of moderate severity. Many of these fixes are related to Windows internal components that an attacker could leverage to gain remote code execution or perform local privilege elevation.

The Remote Desktop Protocol (RDP) is once again under the spotlight, but this time, it isn’t the server that is impacted, but the RDP client. Not one to be left out, Adobe is also issuing an update to repair one critical vulnerability in Flash, and they produced one advisory.

There are reports that the two elevation of privilege vulnerabilities affecting Windows components are actively being exploited.

It’s worth reminding readers that the availability of patches does not mean that your computer has installed them, yet. To find and download this month’s Cumulative Update patch yourself, search for the term “2019-09” at the Microsoft Update Catalog website.

Let’s have a closer look at some of the interesting vulnerabilities:

It is possible to produce an out of bound write in the kernel driver in charge of the common log file system. An attacker, after having control of the machine, could leverage this vulnerability to elevate its privilege. This vulnerability is being exploited in the wild.

There exists a use after free vulnerability in the Winsock 2 Instable File System Layer kernel driver. As with the previous vulnerability, an attacker could elevate its privilege locally. By default, the driver is disabled on Windows (this can be checked with this command in an elevated shell: “sc qc ws2ifsl”). This means that by default the vulnerability is not exposed. This vulnerability is being exploited in the wild.

These two vulnerabilities could be used to gain remote code execution on RDP client. The scenario here would be that an attacker first needs to control a machine with RDP server running, usually a Windows Server or a virtual machine. A legitimate user or administrator would then need to execute through the RDP session on the compromised machine the malicious that would attack the RDP client. A successful attack, would allow the attacker to gain remote code execution on the machine of the tricked user and pivot to it.

SharePoint suffers from multiple unsafe deserialization on BDC models. A successful attack would allow an attacker to execute arbitrary code on the server.

Sophos has published the following antivirus and intrusion protection signatures to address some of the vulnerabilities referenced above.

In addition, the following IPS signatures refer to some of the vulnerabilities referenced in the preceding text.