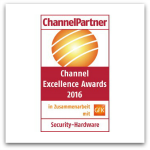 Sophos is pleased to announce that we received a prestigious Channel Excellence Award this week from IDG’s ChannelPartner magazine. The awards are presented to the top technology and distribution companies in the DACH region.

We were recognized with the 2016 Channel Excellence Award in Security Hardware, besting nine competitors in that category. Additionally, we were selected as a Preferred Vendor in the Security Software category.

The Channel Excellence Awards are based on a thorough and objective study conducted by GfK, the globally-recognized market research company.

This award complements another major channel win for Sophos in Western Europe – we were named Security Vendor of the Year at the Dutch IT-Channel Awards on 21st January.

The channel community has recognized Sophos with numerous awards, in regions all around the world.

Recently, Sophos was chosen as the CRN Security Vendor of the Year in DACH, and the Best UTM Vendor at the Reseller Middle East Hot 50 Awards 2015; and we garnered the top awards in every security category in the 2015 CRN Annual Report Card – for the second year in a row.

Although Sophos is the recipient of all these awards, it’s our partners who are the real winners, thanks to our channel-first strategy and our industry-leading products.