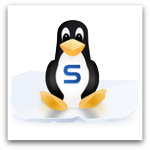 Linux is widely considered to provide a higher level of security than traditional operating systems.

As a result, security tools such as anti-virus software are often ignored on the Linux platform.

However, Linux is increasingly popular with attackers, because Linux systems are often used for critical roles such as developer workstations, web servers and internal file servers.

In addition to being susceptible to Linux-based and cross-platform exploits, unprotected Linux computers can also serve as distribution points for Windows, Mac, and Android malware.

To investigate just how prevalent Linux servers are in the cybercrime ecosystem, Sophos security expert Chester Wisniewski recently took a SophosLabs list of 178,000 newly-infected web servers, and worked backwards to see what operating system they were running.

He found that about 80% of the servers in active use by cybercriminals for spreading malware were running Linux.

In addition, he found that about 80% of those infected Linux systems were other people’s computers: innocent servers, deliberately hacked and co-opted by the crooks to provide bandwith and legitimacy for online criminality.

(Audio player not working? Download MP3, listen on Soundcloud, or read the transcript.)

So, we’re excited to announce that Sophos Cloud Server Protection now supports Linux, so you can defend your Linux servers and desktops against cyberthreats in just the same way as you protect your Windows and Mac systems.

It delivers excellent performance, stability, and reliability on a wide range of Linux distributions, including Amazon CentOS.

Protecting your Linux systems with Sophos Cloud is extremely easy: just download the Linux “thin installer” from the download area of your Sophos Cloud Console, and run it on any Linux computers you want to protect.

(If you have Linux computers that are already running Sophos Free Antivirus for Linux, you can upgrade them to Sophos Cloud Server Protection and enjoy the benefits of central management, reporting, and access to technical support.)

We called it Sophos Cloud Server Protection for Linux, because the vast majority of Linux systems out there are servers.

But you can protect your Linux workstations as well – just add them into your license along with the servers!

Hi Paul,
is there any video tutorial for linux server protection ,
please share i want to see how it works