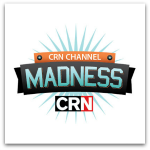 The first-ever CRN Channel Madness Tournament of Chiefs started with 32 of the industry’s most influential channel chiefs, a field that included executives from tech giants like IBM, Verizon, VMware, Cisco, Citrix, HP and Palo Alto.

It ended with one – Mike Valentine, Senior Vice President of Worldwide Sales at Sophos, who was crowned champion after besting Verizon’s Adam Famularo in the finals.

Each victory through five rounds of voting demonstrated the quality of the relationships and engagement we’ve built with partners, employees and other members of our community.

Since joining Sophos two years ago, Mike has ushered in a new focus on our channel, and the strategy has paid huge dividends.

In the past year, we’ve increased our partner base by 15% and continue to bring on new partners every day.

Our Partner Program has a 5-star rating from CRN and was named the overall winner in both the Client Security Software category and the Network Security Appliances category in the CRN Annual Report Card (ARC) awards.

We believe that being a 100% channel company is about understanding the needs of our partners and then working hard to deliver on those needs. Our partner advisory council is a prime example of how we listen to partners to help them better grow their business.

Mike says the strong relationship with our partners benefits both sides.

“There are a lot of solution providers that I’ve known for multiple years, and I hope that in everything we’ve done, they’ve gained as much as I’ve gained from them,” Mike told CRN. “This show of appreciation is a nice piece of validation.”

With more than 20 years of senior sales and channel experience at global IT security companies, Mike’s leadership has been recognized many times, including as a Channel Chief by CRN magazine in 2015 and as a top 50 mid-market IT vendor executive in 2014.

We’ve created a flexible and generous Partner Program, with protection for deal registrations, attractive margins and joint lead generation initiatives. Delivered by dedicated channel relationship managers, we get to know partner businesses, so they feel supported every step of the way.