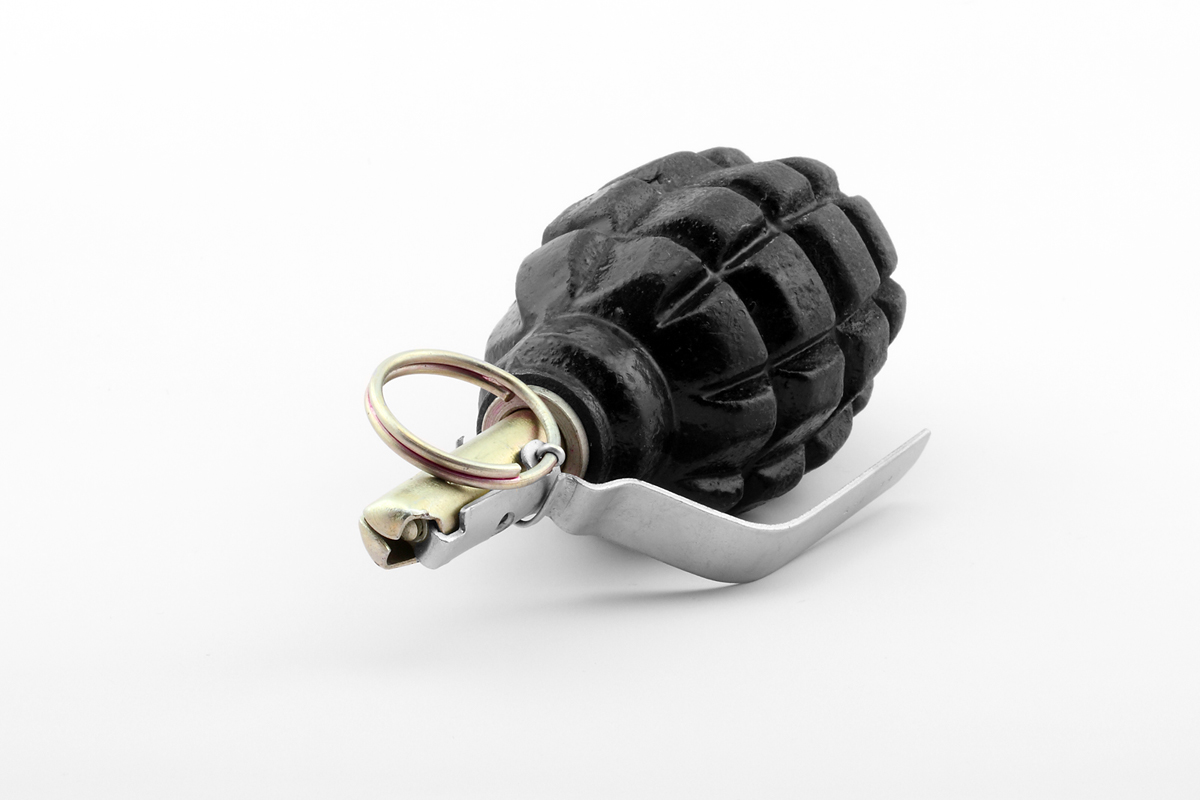 Microsoft’s second monthly security update release of 2021 addresses 56 newly-identified vulnerabilities in the Windows operating system and other products, nine of them designated as critical. But the relatively small number of vulnerabilities doesn’t lessen the importance of the February Patch Tuesday fixes—especially since, once again, one of them is actively being exploited.

That bug, CVE-2021-1732, is a privilege escalation vulnerability in Windows’ Win32k.sys. Even though it’s actively being exploited, 1732 is not the most urgent of February’s fixes—even though it would be ample enough reason on its own to patch. Four network-based vulnerabilities are potentially much more dangerous, and rated by Microsoft as being more likely to be exploited.  Some of them could potentially be exploited in an attack across the Internet.

For the bug to be exploited, both of these features of IPv4 have to be used at the same time—something that would (almost) never happen accidentally. Crafted packets using both features could cause the Windows TCP/IP driver (tcpip.sys) to confuse the internal data structures of the individual packet fragments and those of the reassembled packet. This can cause the driver to read memory outside the boundaries of an internal buffer (an “out-of-bounds read”  condition); with a crafted set of packets, this could lead to an out-of-bounds write condition that could corrupt memory in a way that leads to remote code execution.

This is particularly dangerous, since the vulnerable code is running in the context of a Windows Kernel driver—if successfully exploited, the attacker could execute code with kernel-level privileges. The good news is that remote exploitation of this bug may be thwarted by default by many firewalls and routers. The LSRR option has long been considered insecure because it could be leveraged for address spoofing, and packets containing it are often filtered out of Internet traffic. The bug could still be delivered over less complex local area networks, however, so patching the vulnerability should still be given a high priority.

The two other TCP/IP vulnerabilities revealed in February’s release are related to fragmented packets as well—but in these cases, they’re IPv6 packets.

The more severe of the two is CVE-2021-24094, a bug that is triggered when Windows’ tcpip.sys performs a “recursive reassembly” on fragmented packets. Under certain circumstances, the reassembly process can cause  a dangling pointer condition — with the driver leaving open a pointer to memory space that has been de-allocated that can be exploited to remotely execute code.

The second IPv6 bug, CVE-2021-24086, also occurs during fragmented packet reassembly. In this case, however, the vulnerability is triggered by a large volume of  extension headers in the fragmented packets.  If the bug is successfully triggered, a NULL pointer dereference occurs, crashing the kernel and the Windows system with it, yielding a Blue Screen of Death.

Microsoft did not indicate whether the two bugs can be triggered over the Internet or if they are limited to being exploited on LAN networks only.

Another network-based vulnerability fixed in February’s security patches, CVE-2021-24078, is a bug in Windows DNS Server that could result in remote code execution. This one is definitely exploitable from the Internet, but requires an especially coordinated level of evil to execute. The attacker would have to cause a query to the DNS server for a domain it hasn’t seen before, resulting in a query to a root DNS server. The attacker would then have to spoof the response before it could be returned by the actual root DNS server.

Because the attacker needs to be able to spoof the root server’s response before the real response comes back, the greatest threat of attacks exploiting this bug will come from a threat inside the local network, where packet spoofing is more feasible. But because DNS is based on UDP, the attack could potentially be executed over the Internet.

The remaining eight critically-rated vulnerabilities are less likely to be exploited quickly, but all involve potential remote code execution.  Two are in the .NET Core SDK—one in the Windows and Visual Studio SDK (CVE-2021-26701), and the other (CVE-2021-24112) in the software developer kit for Linux.

Two others (CVE-2021-24088 and CVE-2021-24091) are in Windows codecs associated with image and video handling—the first in Windows’ Codecs Library, and the second in the WIndows Camera Codec Pack. These can be used in remote code execution attacks using a crafted image or video file—a recurring type of vulnerability.

Beyond those marked as “critical” by Microsoft, there are 10 more remote code execution vulnerabilities patched in the February bug fix release. One of them (CVE-2021-24072) is in SharePoint server; since it’s a network-based vulnerability, Microsoft has rated it as more likely to be exploited. 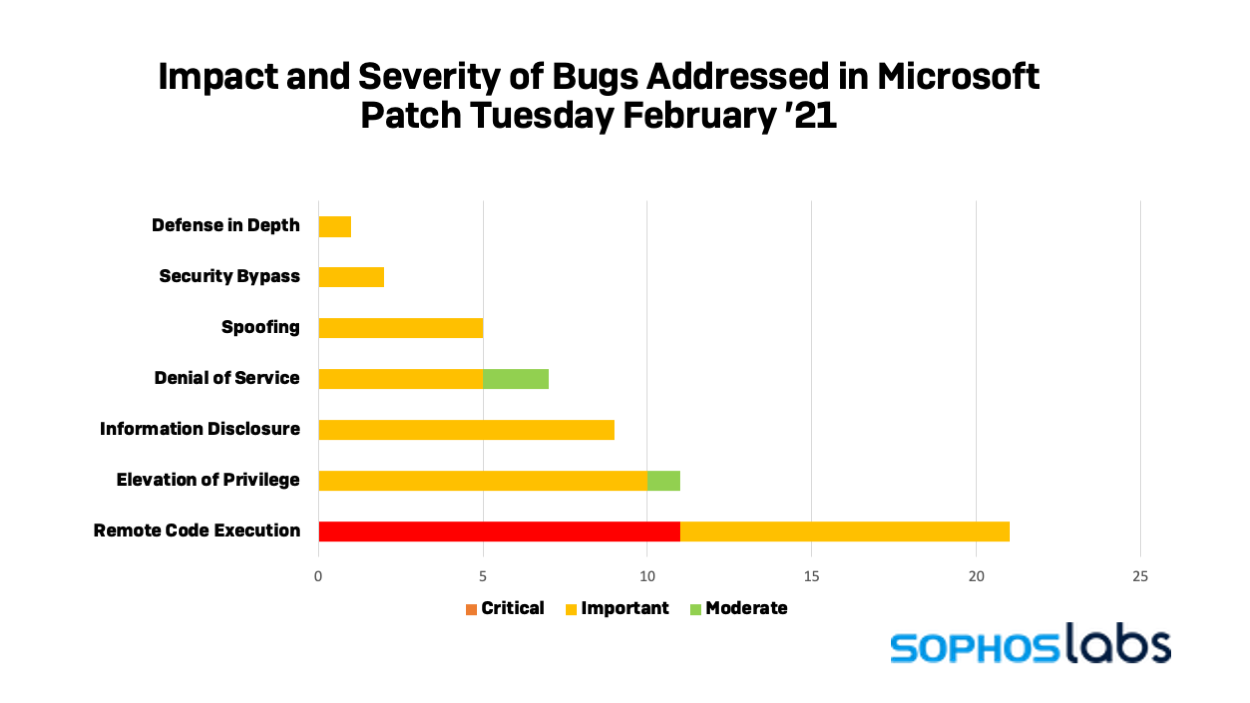 You who are working in security, testing, exploiting and transparency are doing a great job. The same is not true for developers of the 1980s and those companies who own decrepit legacy code bases. I am reading the word “C” all through this. Who the *** would write important code that is run world-wide in C? Think about it. Say “vulnerability” 5 times really fast.

And then when I read “Another network-based vulnerability fixed” how should I interpret the word “fixed”? There are so many bugs it is unbeLIEVABLE. In one computer – mine – in one router up-stream.

For instance February 2020, Microsoft patch, “99 bugs fixed”, “one of Microsoft’s biggest Patches”. That was a year ago. Software is making progress – NOT!

I remember in 1993 a magazine cover – “Java” – what was this new thing? A layer of Intermediate Language and extra compiling – a performance hit?! Hmm. Strange, I thought. Yet oddly intriguing. A revolution, it turned out. There has been progress in software – SO much progress. However we’re simply not experiencing the joy when it comes to… consumer computing, reading these depressing updates and seeing Microsoft which I tend to think is one of the worst software companies in the world, although perhaps “the most successful”. Hey what about Google, a great software company and the Chrome browser with its critical bugs that are constantly being fixed? C code, do I smell C code?

People: Get with the program! Just rewrite the C code parts. TCP/IP stack – has been cobbled together ever since 1969? Write the parts in a secure language and just compile the damn thing and drop in the binary. Is that so hard? What kind of mess is it when there are pointers (dangling), given-length structs, developer-controller memory allocation, developer-controlled checks of integrity at run-time? I don’t think so. That is INCORRECT. Sorry. Hire some developers and testers, and unfortunately (or fortunately) using technology & some insight and a fresh start is what actually fixes the mess.

You know here’s an irony: Bill Gates who is a wonderful guy, he has changed direction completely, is working on safe nuclear reactors. Yes I am not joking. But it’s with smarts, it’s with integrity, transparency, new thinking! That CAN work!