Sophos was recently named “vendor of the year” by Channelnomics for its security strategy and commitment to the channel, and earned three product awards from CRN.

In naming Sophos vendor of the year, Channelnomics’ judging panel singled out CEO Kris Hagerman for having his own personal commitment to the channel, alongside Sophos’ channel team.

“Along with recognition for its channel focus, Sophos also caught the judges’ attention for its products, including its most recent launch in September of the Sophos Intercept X – part of the vendor’s ‘synchronized security’ strategy. The strategy, which one Sophos partner describes as a “game changer,” enables Sophos endpoint and Sophos network security products to directly share information for faster responses to security events.”

The judges also recognized Sophos’ efforts to make life easier for partners through the ways in which they can engage with the company and get access to products, expertise and channel support. 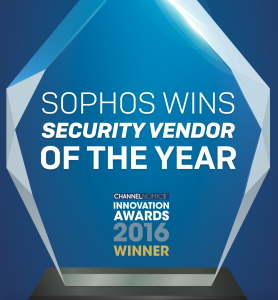 Judges were impressed by Sophos’ cloud-based management platform — Sophos Central — which allows “the centralized management and configuration of Sophos products” for both end users and partners to access easily.

“All in all, Sophos demonstrated this year that solid products, ease of doing business and a firm commitment to the channel do not go unnoticed among both partners and industry peers. The vendor claims to be “100 percent channel focused and channel first,” and this award recognizes that and more.”

CRN said Sophos Synchronized Security “includes better visibility through analysis of the root cause of cyberattacks, allowing security teams to view the full range of impacts of an attack.” 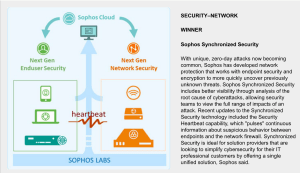 “Being able to port email security into the Sophos Central offering is a big thing” and complements the company’s current strategy to offer endpoint protection, server and wireless protection all from Sophos Central, Russell said. 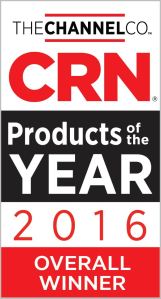 “Now being able to manage customers’ email within the same single pane of glass is absolutely huge for us,” he added. 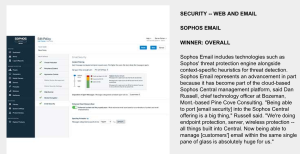 CRN also named Sophos as a finalist for Intercept X. 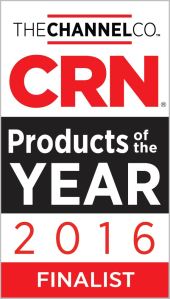